The Solar Temple slot is the latest addition of Playson, a Malta-based casino software provider, to its gaming portfolio. Solar Temple Slot takes its players deep into the jungles of the ancient Americas. And aims for players to search for big win at online slot machines.

Along with stunning visuals and an immersive soundtrack, the developer has incorporated a 10-spins cycle mechanic in the Aztec-themed game. The company’s top-performer, Solar Queen, also has a popular feature. 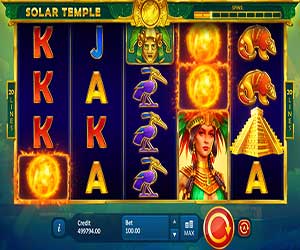 The Solar Temple slot also has Flaming Frames as a feature that is similar to the fan-favorite, which has launched last year. According to online gambling sources, the function is activated during the base game. It is when the Sun symbol comes up on the reels and remains in place for the cycle’s duration.

The win multiplier increases by x1 when the sun symbol repeatedly shows up within the same Flaming Frame. And this feature provides hot prizes to lucky players.

On every tenth spin of the cycle, each frame is transformed into Wild Symbols, then the feature resets. An extra spins bonus mode is incorporated into the 5-reel, 20 pay lines and adding more extra Wild symbols to the reel. These wild symbols also appear more frequently. During the bonus round, it enhances the gameplay as players aim for bigger wins. After landing, Wild symbols stick to the reels.

The video a lot will make an exciting addition to any operator’s stable of titles as it offers big prizes hidden behind the temple walls.

A recent content distribution agreement with a leading gambling company, Playtech, has been announced. The partnership includes the supplier’s promotional tools, such as extra spins, seamless play, and regular tournaments with daily prize drops. Also, it includes its integration-free jackpots to enhance player retention as per gambling news.