While it might be God’s plan to make the Toronto Raptors reach the NBA Finals, it is not Kawhi Lenard who is in the spotlight. Instead, it is their unofficial mascot Drake who is being talked about by the media for his courtside antics. Also, bookies noticed the rapper and started offering Drake prop bets.

Most of the Drake prop bets involved the worst behavior the rapper may engage in during the NBA Finals. Here are some of the props that you can actually make during the series between the Warriors and the Raptors. 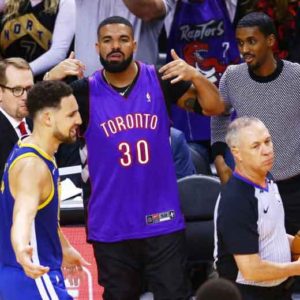 1. Will Drake watch a Finals game at the Oracle Arena?
Yes +145
No -190
Despite minus-money odds, many fans think that Drake will not be going to Oakland to watch Game 3 or 4. Most likely, he will stay in Toronto and watch the away games at Jurassic Park.

2. Will Drake massage Coach Nurse’s shoulders during the NBA Finals?
Yes +200
No -400
Drake made sports news headlines during Game 6 of the Bucks-Raptors series when he rubbed Nurse’s shoulders. At +200, betting yes might be a good idea.

3. Will Drake miss a Finals game at Toronto?
Yes +425
No -800
This is a sure bet. Being a superfan, he will never miss a home game. In fact, he watched all home games during the playoffs this year.

4. Will Drake wear Warriors clothes during the NBA Finals?
Yes +225
No -350
Nobody knows what Drake will wear during the game. This will be a hit or miss.

5. How many games will Toronto win with Drake watching at the sidelines?
Over 1.5
Under 1.5
Even with the series tied at 1-1, the Raptors still the home court advantage. Smart bet will be over.

Sports betting software has the Golden State Warriors at 1 to 3 favorites. It will be the team’s fourth title in five years. Want to start a bookie business? There’s no better time to learn how to be a bookie than now.