The Swedish online gambling revenue declines in the second quarter due to government restrictions. It eliminates the pandemic pump that is available in other markets—the figures released by Friday by Sweden’s Spelinspektionen regulatory body.

Most gambling news reports are showing the figures for the local online gambling operator licensees. In which the generates revenue is just over SEK3.6b (US$411.5m). In three months period ending June 30. It was up by 3.6 percent from the same period last year but a 1.2 percent decline from Q1 2020 figure.

Swedish online gambling, which includes online casino licenses, are stricken this spring. It is because of the government announcement of strict limits on customer deposits and spending. Also, the government claims that it acts to protect consumers from excessive gambling while under pandemic lockdown. However, the data showing that Swedes has not significantly spiked up their gambling activities,

The state lottery and slots hall revenue falls 8.5 percent year-on-year to SEK1.3b in Q2. At the same time, the company’s Casino Cosmopol land casinos are not operational for the entire period. All other verticals are also negative, except for charitable lotteries, in which revenue rises 2.7 percent to SEK950m.

Meanwhile, LeoVegas, an award-winning online license casino as remark on online casino reviews, has not been shy in criticizing the Spelinspektionen 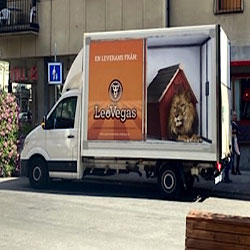 ’s regulatory regime. The online casino is as well as testing the government’s low tolerance for gambling advertising.

Recently, the company launches a public ad campaign wherein ten large furniture trucks roam the streets of Stockholm. Besides having a tagline on the side saying ‘A delivery from LeoVegas.’ The campaign will last for six months.

Thus, the campaign allows Swedish adults the opportunity to win a Rolex watch. Once they spot a truck, they have to take a photo and upload it on social media with the appropriate hashtag.