We are turning the corner and coming down the stretch of the MLB Baseball season, with about 40 games left. For our MLB Betting Tips, this is the time of the season that the contenders ramp up their game and start to win.  In addition, it is done at a higher winning percentage have to lay much higher prices at at the online sportsbooks.

Toronto has shown improvement at the trade deadline.  Furthermore, they are threatening to take over the lead in the AL East away from the New York Yankees. NY enters Friday with a slim 1.5-game lead over the Blue Jays.  However, Toronto has all the momentum and is currently even with NY to win the AL East at -115.

Kansas City is running away with the AL Central, having an AL-best 73-47 record while nobody else in the division has a winning record. The Royals are 13.5-game up in the division, but still have plenty to play for.  This is because they are looking to secure home field advantage throughout the playoffs (leading the Yankees by 6 games).

We do not want to fade KC quite yet.  However look for when it’s obvious that they have everything taken care in the American League. Thus, they will likely start to rest players and set up their pitching rotation. Also, be sure to look for the right spots to fade them when that becomes applicable.

This should be a tight race throughout the next month and a half. 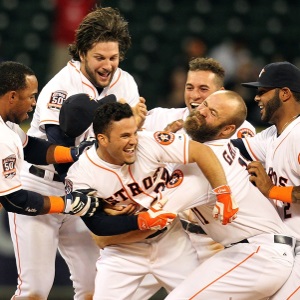 Both the Astros and Angels are stalling in their race for the top of the AL West division.  Thus they are allowing Texas to creep back into the conversation. Houston currently leads the Angels by 2.5 games, with Texas just four games back. Whoever catches fire first will have a big leg up on the other two teams.

Houston has done far better than the rest of the group with a +75 run differential.  On the other hand, the Angels are +24 and Texas is -29 according to several sports betting experts.  Of course, winning margin doesn’t matter at all in the standings. However, it’s a good indication of how the team has done over the course of a full season. We like Houston’s 1-2 punch at the top of their starting rotation.  This is because we believe they have enough to finish atop the division by the end of the season.

The Angels and Rangers are still in a good spot even if Houston runs away with the AL West crown.  In addition, they are right in the thick of the AL Wild Card hunt with Baltimore. The Orioles are not often in playoff conversations, but they are behind the Angels for the second Wild Card spot.

These teams are likely going to be listed as big favorites quite often over the next month and a half, but they also have all the motivation in the world to play well. Pick your spots – especially when the rosters expand and teams with no playoff hope begin to put their younger players in the lineup.