A South Korean national fencer tested positive for the COVID-19 virus. She participated in a tournament in Europe, according to the Korean Fencing Federation. Also, the governing body wants to keep her identity private.

The female fencer returned to South Korea Sunday after a competition in Hungary. She complained of a sore throat while she was in Hungary. Later, she underwent testing at a medical center in Ulsan.

All members of the national fencing team who went to Hungary with the patient will undergo self-quarantine in their homes. Also, the sports federation notified the Korean Sport and Olympic Committee of the test result. 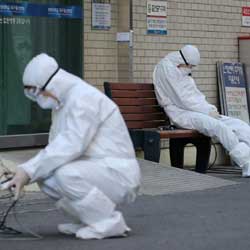 Based on football betting reports, the female fencer is one of the most recent cases of the novel coronavirus in South Korea. At present, there are around 8,500 confirmed cases of the virus in the country as of Wednesday. Also, health authorities said that they recorded new infections of the virus in double digits for the fourth day in a row last Wednesday.

Health authorities heightened their alertness for cluster infections across the country, according to sports betting reports. They called for the cancelation or postponement of nonessential overseas travels to keep the virus outbreak under control.

There’s not a lot of live events to bet on sports. Most significant events are either canceled or postponed for a later date to prevent the spread of the virus. The good news is that the rate of new infections slowed down since the second week of March.

Out of the 93 new cases in South Korea, nine came from North Gyeongsang, and 46 were from Daegu. The two cities remained the epicenters of the virus outbreak in the country. However, citizens are warned about the community spread of the virus through unknown origins.