The Lotte Giants announced it waived Glenn Sparkman on Sunday. Also, Dan Straily returns to the Giants as Sparkman’s replacement. According to baseball betting sources, Straily signed a $400,000 deal with the team.

Dan Straily Returns to the Giants 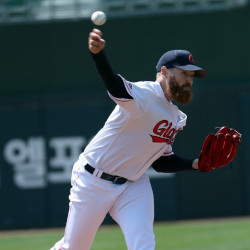 Although Straily had a bad 2021 season and struggled in the minors earlier this year, his experience playing in the Korean league would allow the Giants to insert him into the rotation immediately. Thus, the team picked him as Sparkman’s replacement.

Sparkman ended his KBO debut year with two wins and four losses. Also, he had an ERA of 5.31. However, Sparkman is not the only player replaced by the team. Lotte also waived DJ Peters and signed Zach Reks. Thus, only Charlie Barnes remained the original foreign player in the team’s lineup this season.

There’s half a season left in the KBO. You can do baseball totals betting and other baseball wagering options throughout the regular season and the playoffs.

Bet on KBO games with VOBET, the best sportsbook in the world!