iSoftBet is returning for the full premiere of its newest title of online slot machines, the Western Gold Megaways. It was just over a month since the British online casino games and software provider first announce its new six-reel innovation.

Initially, the Western Gold Megaways debuts on a limited basis via sites operated by several network partners of iSoftbet. It includes Softswiss, Stoiximan, and Betsson AB. Even though it still manages to receive good feedback from most casino reviews online. Besides, it becomes the most successful exclusive partner launch ever.

What Does the Western Gold Megaways Can offer? 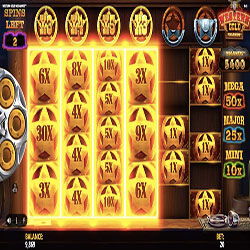 iSoft proclaims that the video slot is themed around an unruly Frontier American town and comes with classic cascading wins. It also has Max Megaways modifier, which can be triggered to guarantee 117 649 ways to win. Also, a shot at multiple cascading wins.

According to an official from iSoftbet, he explains how to win big. Wherein players where be able to get online should be keen, especially in collecting at least five sheriff’s badge symbols. It also explained that the bonus awards cash values or one of three jackpots.

Most casino games tutorials are upon the first time your sign up for the first time. However, you may miss it as the video slot transport s players to the badlands od the frontier. It is through a dash to find riches while enjoying thrilling gaming experience.

Furthermore, it features the popular Megaways mechanic and the Hold and Wins bonus round. Players will have a chance to win huge sums in the Wild West town where the sheriff rewards good behavior. iSoftBet can’t wait to see how the people will receive the newest video slot from across the globe.