Just like any other modern online slot machines, it has a 5-reel, 243 ways to win. It also features custom volatility where it transports players to the banks of the longest river in Africa, the Nile. The Ancient Egyptian deities mainly rule the reels.

Feature-packed Recent Addition to the Power of Gods Series 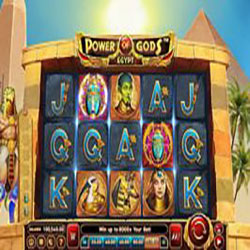 The recent addition to the Power of Gods series video slot is ruled by the following deities: Ra, the sun god, and Sobek, the crocodile god. It also includes Isis, the goddess of healing and magic, and wife to Osiris, the underworld’s god. Plus, the cat-headed goddess, Bastet.

Wazdan’s Power of Gods series is back, and it is more feature-filled, offering a 96.19% RTP. The game is also packed with features such as Wild Scatter, Ra spins, Sobek Extra Spins, Isis Extra Spins. Besides Bastet free spins, Gamble, and popular Buy Feature.

The game’s four possible extra spin modes are sure to have players impatiently awaiting scatter symbols to land. With these separate bonus modes, including a final gamble option to double a player’s winnings, it is sure to immerse all users on different online casinos.

How Power of Gods: Egypt Works?

The player needs to collect seven scarab symbols from the reels to trigger the Ra Extra Spins. The scarab symbols do not all have to be collected in the same spin. However, they must get in consecutive spins, or the count will be reset to zero.

Players to find all seven are whisked away to the realm of the sun god, where along with a seven times multiplier. Expanding wilds also awaits where it leads to fearsome wins.